Azuero Peninsula (Spanish: Península de Azuero) is a large peninsula in southern Panama. It is surrounded by the Pacific Ocean in the south; the Pacific and Gulf of Montijo to the west, and by the Gulf of Panama in the east. The peninsula is effectively divided into two regions; the Western Azuero and the Eastern Azuero, as no serviceable roads join the two peninsula regions past the Pan-American Highway.

The Eastern Azuero Peninsula is known for baseball and is also a center of activity during the annual 'carnaval', with Las Tablas being the hub. Pedasi is a small fishing town with sport fishing.

The Western Azuero Peninsula is known for its cattle ranching, farming, fishing, sunsets and beaches.

Tourism has begun to increase in the area both for the aforementioned sport fishing, surfing in Playa Venao, now host to the Billabong Surf Championships and for the local charm of cities like Chitre, Las Tablas and Pedasi. Due to a rise in tourism, real estate development has begun. The area enjoys some of the best weather in Panama being in a region known as the 'Arco Seco' (dry arc). 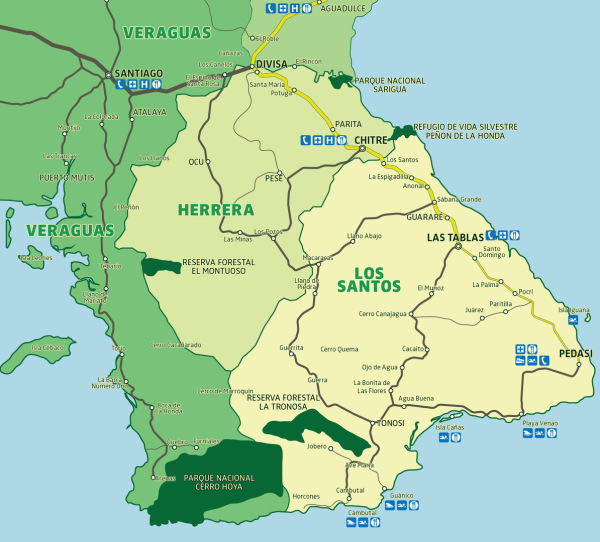 You can see on this new map of the Azuero Peninsula, that the 4-land highway from David or Panama City runs all the way to Las Tablas.

Unique among properties in the area, our land has fresh water at the surface, almost centered on the property in the form of a pond that runs in a stream east to the ocean! While adding topographical interest, it also yields an excellent, tropical landscaping potential.